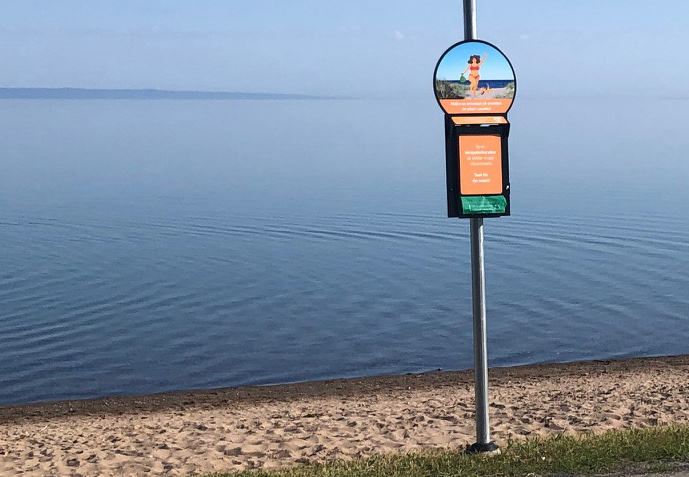 Did you know that there is a gigantic plastic island in the Pacific Ocean which is about three times bigger than the area of Sweden? This plastic island consists of 79 000 tons of plastic and is situated between California and Hawaii. The reason that plastic collects in the ocean is the movement of the sea currents and the fact that we, people, throw away plastic in nature – on the beach for example. What can we do to help solve a problem like that? TiksPac, a member of our network Nudging Sweden, found one solution. They developed a garbage picking station which works with nudging in order to decrease littering.

In cooperation with Nudgd and our sister organisation A Win Win World, they nudged the citizens of Falkenberg to, instead of throwing away trash in nature, do the opposite and pick up the trash – after themselves and others. The new garbage picking station gives a friendly nudge in the right direction by using an attractive product with bright colors, a cool shape and a powerful message. The garbage picking station also dispenses free biodegradable bags, which makes it easier for people to help pick up trash.

TiksPac received many positive comments from both citizens and park employees, saying that the areas have become much cleaner since the introduction of the stations.

“We are very happy to be part of this project! Right now we are working on developing 25 more nudges for different environments – for example parks, forests, public barbecue places, the mountains and other areas where we need to help each other to keep nature clean from plastics and trash” says Katharina Paoli Brunat, CEO for Nudgd.

Would you like to receive more news about nudges? Sign up to receive our newsletter (in Swedish) here.